PEGA Pool is a Bitcoin mining pool where clients who own ASIC miners connect to its network in order to mine Bitcoin together.

Bitcoin mining is a fiercely competitive industry, but it’s also hard to maintain profitability. It cannot deny that factors such as geography, weather, energy cost, or political jurisdiction can all harm or benefit Bitcoin miners.

As Bitcoin’s Proof-of-Work mechanism is based on the SHA-256 hash function and is random, miners can mine for long periods with no guarantee that they will find a block, which makes them rewarded.

Therefore, this makes it impossible for individual miners to predict when they’ll find a new block and produce revenue.

What Is PEGA Pool All About?

Large mining companies can be over by the size of their operation, thanks to their reserved capital that can compensate for unexpected drops in revenue.

However, it may be extremely difficult for small, independent Bitcoin miners to maintain their operation with zero revenue for months before a new block is found.

The idea behind PEGA Pool is to help smaller miners smooth out their revenue. The network aggregates their resources and distributes the rewards they receive. 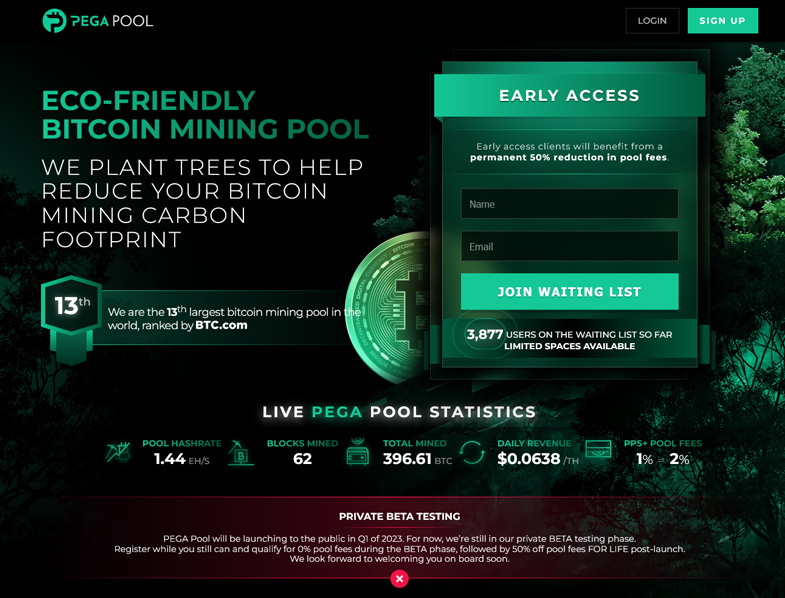 PEGA Pool is British-owned and operated making it a credible and quality service. Many mining pools are currently Chinese and some Western clients prefer not to use Chinese pools but have limited choices.

With PEGA Pool, you can obtain a much more stable income than mining alone. PEGA Pool is currently in the pre-launch phase. You can join the early access waiting list until its launch to the public in Q1 2023.

Currently, the only client that is mining with PEGA Pool is PEGA Mining, its sister company, and a few beta testers.

It’s a well known fact that Bitcoin’s energy consumption has drawn criticism from environmentalists. The design of proof-of-work mining incentivizes miners to ramp up operations as quickly as possible and irrespective of the source of energy.

There are a lot of reports that reveal the cost of an energy-guzzling cryptocurrency mining industry.

Bitcoin consumed an estimated 36 billion kilowatt-hours of electricity from 2021 to 2022, which was as much as all the electricity consumed in Maine, New Hampshire, Vermont, and Rhode Island put together in that same period. 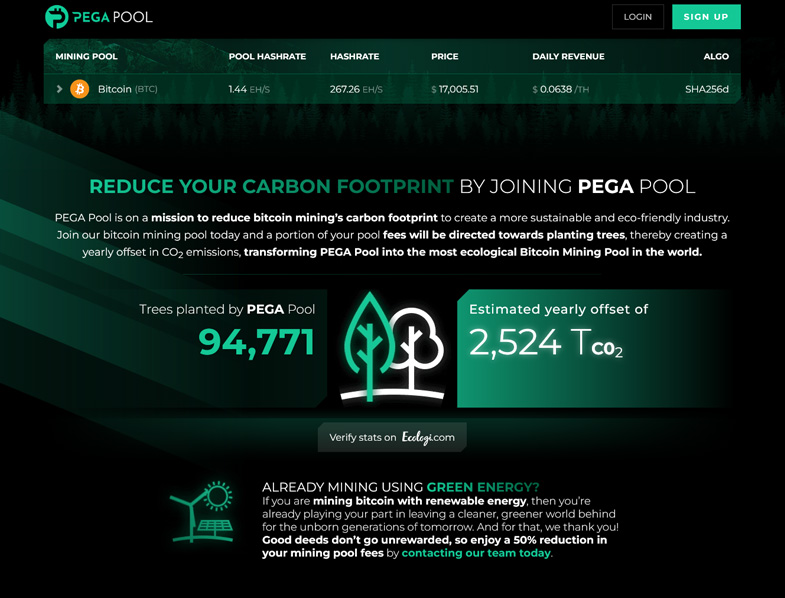 In addition, it’s said that the electricity consumption of cryptocurrency mining in the United States implies that the industry was responsible for an excess of 27.4 million tons of CO2 between mid-2021 and 2022. It’s also three times as much as emitted by the largest coal plant in the U.S. in 2021.

These figures explain why the state, local, and federal policymakers are taking steps to reduce the harm of Bitcoin mining . As a whole Bitcoin mining is being scrutinized massively in the media this year over the amount of fossil fuels miners burn.

However, there is still a lot of Bitcoin mining in China!

PEGA Pool Set To Change The Mining Industry For The Better

Developed as an eco-friendly-focused network, PEGA Pool opens to all bitcoin mining clients regardless of their renewable energy usage. Clients that mine with non-renewable energy will use a portion of their pool fees to plant trees to help offset their mining carbon footprint.

A study indicates that carbon emissions from bitcoin mining surged 126% for the six years ending 2021 which is more than enough for industry observers to sound the alarm bell regarding environmental sustainability.

In addition to getting critics off their backs, there’s good reason for miners to reduce their carbon footprints.

Coal and natural gas are the primary power sources for bitcoin mining in the developed world making miners need to consider because prices of both commodities are soaring this year amid shrinking supplies.

A renewable energy mix of solar, wind, and hydropower is considered that will improve the Bitcoin mining industry profitability while also helping efforts to combat climate change.

In fact, Solar mining and other viable hybrids are providing excellent alternatives, which will be a green energy revolution with numerous benefits for Bitcoin mining.

More and more proof-of-work communities are aware of Bitcoin’s extraordinary energy consumption and fossil fuel habit, which are unattractive when much of the rest of the economy strives to rapidly decarbonize.

As you know, Bitcoin mining profitability is based on a wide number of factors, including the price of Bitcoin, the mining difficulty, the cost of energy, the type of mining hardware, and others.

Bitcoin miners are feeling the squeeze in their profit margins currently due to the Bitcoin mining difficulty increasing and the price of Bitcoin decreasing in 2022.

Bitcoin mining difficulty has been rising in 2022, continually breaking new all-time highs. Bitcoin is programmed to self-adjust to maintain a target block time of 10 minutes, therefore, Bitcoin’s mining difficulty adjustment occurs every 2,016 blocks or about every two weeks.

The Bitcoin hash rate is another fundamental metric for assessing the strength of the Bitcoin network.

A higher hash rate means it will need more computing power to verify and add transactions to the blockchain. Additionally, this also makes Bitcoin more secure as it not only would take more miners but also more energy and time to take over the network.

Next is the price of electricity. Amid soaring energy prices caused by recent supply issues, miners need to pay special attention to possible implications when using nonrenewable energy.

Another one of the most important factors is the pool fee. Joining mining pools instead of working as individual miners is a way to combine miners’ computing power and increase the chances of getting a block and mining faster.

However, pool miners should be aware of another small expense that is taken by pool admins that set up the software for this type of mining. Bitcoin miners that join PEGA Pool will receive reduced pool fees that can make all the difference.

To reduce Bitcoin’s carbon footprint and make the Bitcoin mining community better, PEGA Pool will be a force to be reckoned with in 2023. To learn more – just click here!