How to learn Web3 development for beginners 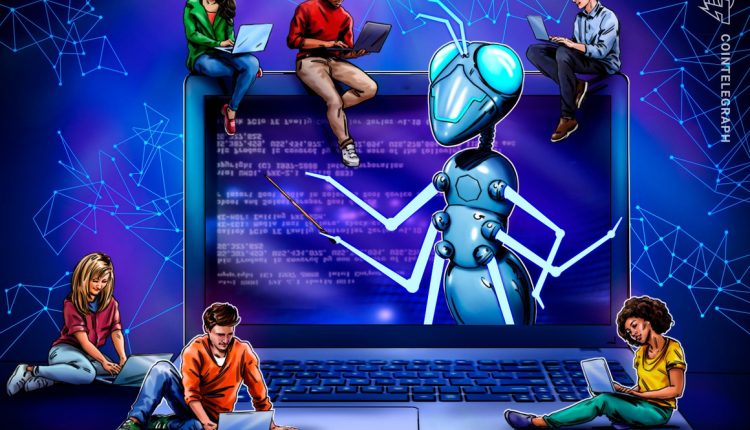 The idea of Web3 has begun to take hold among business web developers in recent years. Modern business models emphasize the significance of moving beyond Web2 and discovering new ways to manage, organize and create meaning from the enormous volume of user-generated data, even though ideas about the current developments of the Web are still hazy and unclear.

The Semantic Web is frequently linked to the concept of Web3 as business strategies and web developers envisioned it. Tim Berners-Lee, the inventor of the World Wide Web, initially proposed the idea in 1999. He saw the potential for enabling robots to “speak to one another” and to comprehend and derive meaning from semantic data.

However, corporations and computer scientists are creating more compact and portable applications that use crowdsourcing to organize data on the Web and the interactive features of Web2. As a result, the demand for Web3 and blockchain developers (devs) is rising in the cryptocurrency and Metaverse markets.

What is Web3 development?

The world has altered due to a number of simultaneous technological advancements. For instance, early computers were designed exclusively as calculators; however, the internet’s commercialization gave rise to Web3 technologies like blockchain, which are now in vogue. Web3 development refers to the practice of building decentralized applications (DApps), which run on blockchains.

Moreover, cryptocurrencies are prevalent in several decentralized finance (DeFi) protocols. That said, network participants who wish to participate in developing, running, contributing to or enhancing DeFi projects are rewarded with crypto tokens.

On the contrary, Web3 developers are experts in mathematics, computer science and blockchain development and know how to use technology to make secure digital assets. Additionally, they are skilled at creating smart contracts for various fields, including real estate, healthcare and finance. But how does one start working on Web3?

The blockchain industry requires knowledgeable developers who understand blockchain technology and have exceptional problem-solving, creativity and communication skills. In addition, computer engineers must be familiar with the Solidity programming language, which is used to develop smart contracts on the Ethereum blockchain. But what other programming languages are used in Web3? Blockchain engineers should also know C++ or JavaScript for writing smart contracts.

Where can you learn Web3 development?

Due to the high salaries of Web3 developers in the blockchain sector, many aspiring Web2 developers want to learn Web3 development. There are various ways to gain Web3 skills, as discussed in the sections below.

To start your journey in Web3 and the Metaverse, follow seasoned blockchain experts and crypto influencers on Twitter to learn about the types of projects on which they are working. For instance, Ethereum co-founder Vitalik Buterin and core Ethereum developer Tim Beiko consistently share updates about the Ethereum blockchain. By following them, one can stay up to date on the trends in the blockchain industry.

Alternatively, subscribe to crypto newsletters to discover the Web3 tools you will need and YouTube channels like Smart Contract Programmer or Patrick Collins to learn Web3 development free of cost.

Join a Web3 developer DAO or a Discord server

One can discover Web3 development communities by joining a decentralized autonomous organization (DAO) or a Discord server. Developer-centric DAOs often seek volunteers to collaborate on DApp or decentralized governance-related matters.

Similarly, an ideal method to become engaged and begin developing your blockchain portfolio is to contribute to a Web3 project’s Discord server by, for example, responding to user inquiries. Also, educational materials such as Web3 tutorials for beginners can be made more accessible by joining the #events, #jobs and #resources channels available on many of these servers.

Learning from experienced instructors through free or paid courses may help you to acquire the fundamentals or level up your development skills. For instance, the University of Nicosia offers free courses like Introduction to Decentralized Finance, which teaches about DeFi fundamentals, the DeFi application stack and novel applications beyond DeFi.

Similarly, nonfungible token (NFT) enthusiasts can sign up for a course titled NFTs and the Metaverse to learn how to create NFTs and mint the course certificate for a small fee. On the other hand, platforms like Coursera offer financial aid to help people up their skills at no cost.

Alternatively, joining Web3 University could be productive for those seeking to understand the basics of Web3 programming, including writing Solidity smart contracts, creating NFTs and creating full-stack DApps. Ethereum community tutorials are also an accessible source for learning how to develop NFTs, ERC-20 tokens and full-stack blockchain development.

In addition, an interactive platform called CryptoZombies teaches how to create your own crypto-collectibles game to learn about creating smart contracts in Solidity or Libra. Furthermore, one can find Web3 builders by following well-known Web3 GitHub projects to learn from expert developers who regularly contribute to open-source Web3 development.

Participate in a Web3 hackathon

A communal coding event called a “hackathon,” or a “codefest,” brings programmers and tech experts together to enhance or create a new piece of software. But one doesn’t need to be an expert developer to participate in a hackathon.

Hackathons have a strong competitive spirit, but they also catalyze the expansion of the Web3 community. For instance, Web3 hackathons such as ETHDenver’s BUIDLathon, Polygon BUIDLit, ETHOnline and Solana Summer Camp help beginners and advanced coders to improve their programming skills and earn funding to develop decentralized apps. Moreover, the greater diversity in thinking results in more robust Web3 products as blockchain technology is still evolving.

How to become a Web3 developer?

For those interested in becoming Web3 developers, a few simple steps would help you land a career in the decentralized web space. These include:

Learn the fundamental concepts of cryptography, blockchain technology and computer science using various mediums mentioned in the section above.The next stage is to become familiar with the programming language required to create Web3 platforms. There are numerous programming languages to learn, but the ones in demand are Python, JavaScript, C++ and Solidity.Developers also need to comprehend the data structures they’ll need when programming. Understanding these fundamental components of the project enables them to write better code.Finally, start developing smart contracts and testing them on the testnets of blockchain platforms like Ethereum and Cardano. By doing this, blockchain engineers may protect themselves from making the typical mistakes and code errors, which might result in financial losses or problems with the integrity of their data.

How much do Web3 developers make?

Instead of being restricted to a single cloud server, Web3 developers construct apps distributed on a blockchain or decentralized peer-to-peer network that is not under the jurisdiction of a single entity. Can you make a career in Web3? Are Web3 developers in demand? And is learning Web3 worth it?

Workers in the tech industry are in greater demand than ever post-COVID-19 pandemic due to the growth of the Web3 space — individuals who are knowledgeable about blockchain and its applications, such as NFTs, the Metaverse and cryptocurrencies, are earning hefty wages. For instance, the annual compensation range for Web3 lead developers is between $100,000 and $142,000, whereas junior coders earn between $60,000 and $120,000 per year.

Your experience, knowledge of programming languages and seniority would affect your salary. The following image shows various positions or developer types’ average, minimum and maximum annual wages. One can look for such opportunities in the Web3 space at cryptocurrencyjobs.co, Indeed.com and web3.career. 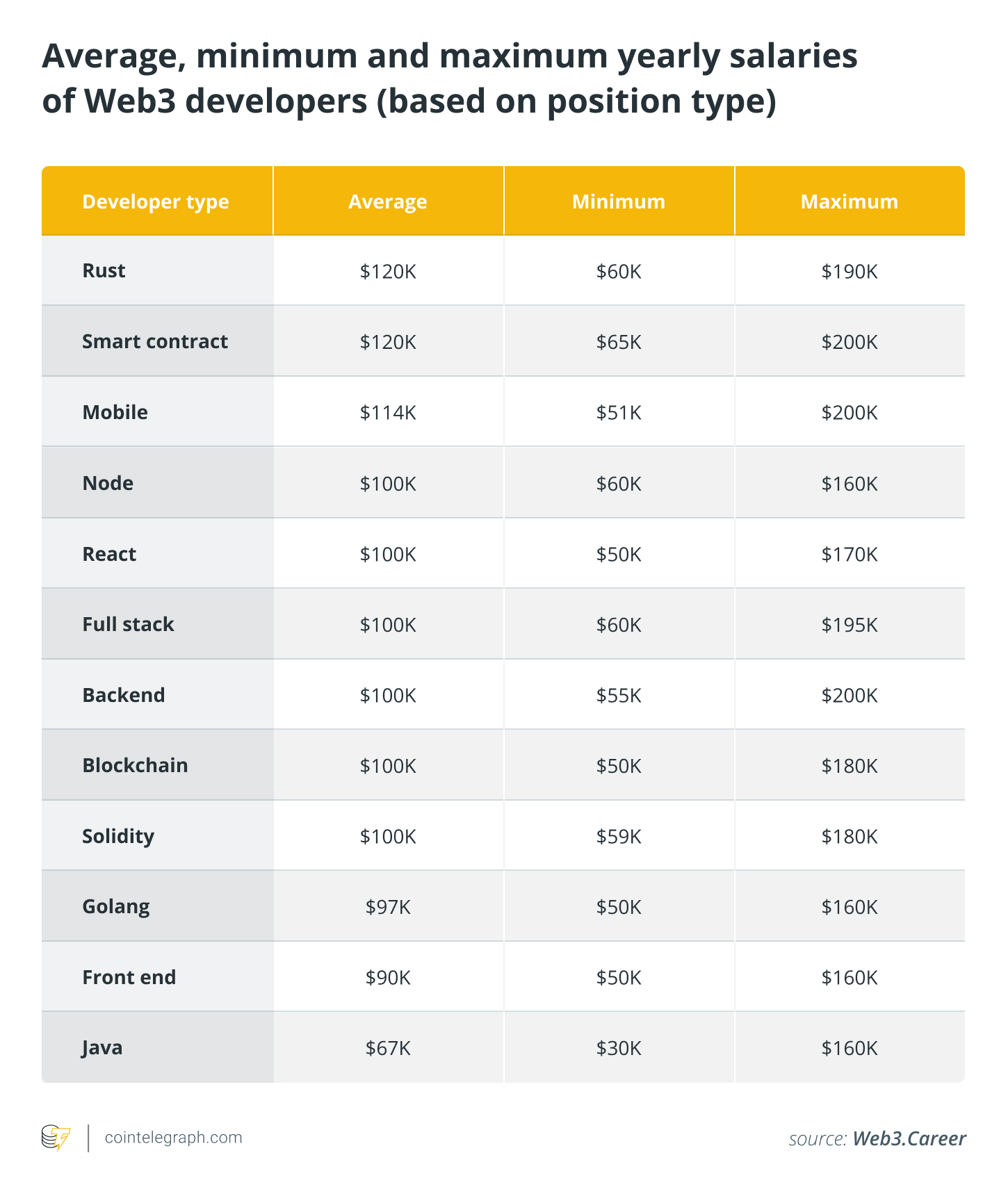 Web3 opportunities in the future

Given the pace of technological development in the past few years, the decentralized generation of the internet allows interaction between everything, including people and machines. As a result, Web3 is quickly taking over the crypto-sphere as it enables users to govern their data using DApps, and earn rewards for participating in the decentralized web space.

Amid the evolution of the internet and the expansion of information ownership, sharing and consumption, the need for a universal standard will decline, and data will be able to interact effectively regardless of how the knowledge was created.

Additionally, the employment surge caused by Web3 will likely outpace the one that happened as the market started to comprehend what Web2 meant for Web1. As a result, the Web3 audience may experience a massive shift resulting from the fundamental economic changes in Web3’s ideology alone. That said, developers and other technology-related positions such as computer engineering will be in huge demand. And they will have the potential to create considerable value and growth over the next decade.

Purchase a licence for this article. Powered by SharpShark.

Luna Foundation Acquires An Additional 37.8k Bitcoin Worth $1.5B, Bringing its Total Holdings to 80,394 BTC

Regulators are ‘spending too much time’ on crypto: Comptroller

Proving it’s really you in the 21st Century – Cointelegraph Magazine